A recent exhibition in Istanbul has a ‘Dirty Story’ to tell us. It is a story that takes us on a distressing journey to the bitter past of the 1980 coup where Turkey’s victims and perpetrators, cultural discrimination, violence and hate are all portrayed through art. The past remains there and continues to challenge Turkish society

Czech-born novelist Milan Kundera says that “wherever power injures you, that becomes your identity.” These words are enough to understand why nearly 30 works are on display at the exhibition, “The Dirty Story.” They are there to uncover a glimpse of Turkey’s misty past and remind citizens of the bitter experiences the country endured in the wake of the military coup of Sept. 12, 1980.

From the exhibition (Photo: Teoman Madra):
“It is enough that the truth comes out”, video, 03.29.22 hours, Hakan Akçura, 2008
(Description: Abdülkadir Aygan was one of the PKK (Workers Party of Kurdistan) guerrillas, between 1977 and 1985 in Turkey. He was a counter-guerilla working in Turkish Armies special gladio team called JITEM between 1991 and 1999 too. This recording include all his confessions from this 22 years. Aygan is now a refugee in Sweden and living with his family under the Swedish Secret Police security. Hakan Akçura found and conviced him for this long interview and talked with Aygans three identities when he was sitting on three different chairs with three different clothes, facing three different angles. Translation into English of the video is still going on.)

With an eye to creating an artistic protest, the exhibition, running from Oct. 23 to Nov. 25 at the BM SUMA Art Center in Istanbul’s Karaköy district, displays works using techniques ranging from photography and pictures to statues and videos.

The exhibition presents themes such as social violence, the culture of hate and discrimination, democracy, peace, the loss of social awareness and the perception of truth. Through their works, the artists have tried to demonstrate how people should brace themselves for their “dirty” stories, while attempting to demonstrate a path toward broadened freedom of speech that takes place in the political and public realms through art.

Every work has a different dirty story to tell. Some of them are rawer, such as the ones that refer to two innocent Kurdish children who were killed at the age of 12.

From the exhibition (Photo: Neriman Polat) 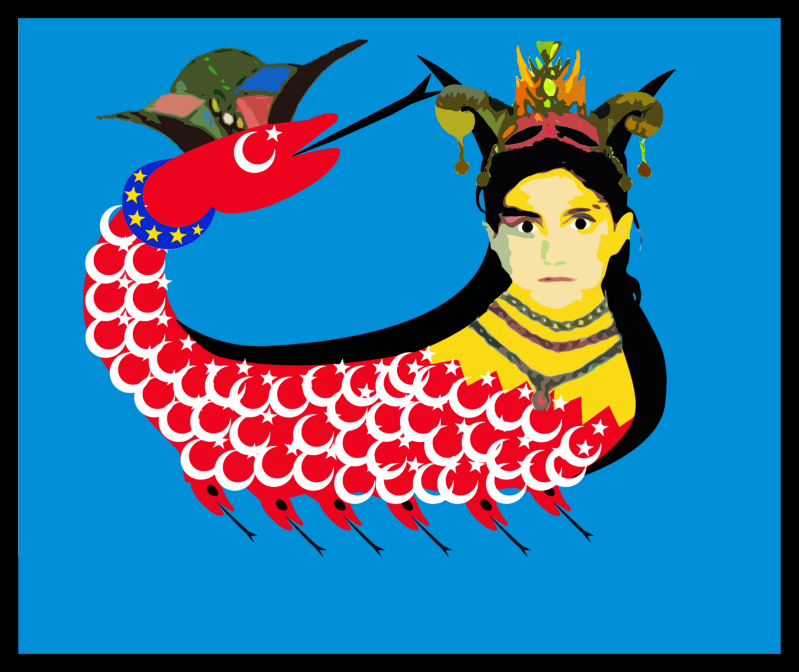 From the exhibition:Left behind from Ceylan to us: Shameran, Hakan Akçura, 2009

A picture of a basilisk is now the sole memory left of Ceylan Önkol [Hakan Akçura, HA], who was allegedly killed in a mortar blast in the eastern town of Lice; meanwhile, a painting depicting white birds flying in the sky around a young boy calls on viewers to commemorate Uğur Kaymaz, who was killed by security forces along with his father in the southeastern town of Kızıltepe.

The exhibition is being supported by Serpil Odabaşı, a famous painter who was born in the pre-dominantly Kurdish city of Diyarbakır.

Speaking to the Hürriyet Daily News & Economic Review during the exhibition, Odabaşı called on people to support the government’s Kurdish initiative to solve the decades-old Kurdish issue. “Do not let more children die. Do not let more mothers suffer pain. We need a new approach to solve our problems,” said Odabaşı, who is also a member of the International Activist Artists Union.

The painting “Kız Şaban” [Nalan Yırtmaç, HA] is another dirty story stemming from the cultural discrimination that is at the heart of society in the southeastern city of Diyarbakır. It portrays Şaban Çelen, a gay man known as Kız Şaban, who was stabbed to death along with his 35-year old roommate in Diyarbakır. Çelen was famous for going out dressed like a woman. Four years before his death, his picture was placed on the front cover of “Prostitution in the Southeast,” a book written by the journalist Ahmet Sümbül telling the stories of women and girls forced into prostitution.

One of the most striking works at the exhibition is “Tarih-i Kadim” (the Old History), a black-and-white photo that combines both Islamic themes and contemporary metaphors by portraying a gravestone with a weapon.

Murat Morova, who is known for his unique art style, conceptualized the exhibition.

According to Morova, society can clean itself only if it accords more respect to human rights and democratic opinions. He said that “Dirty Story” questioned the dirtiness of social and political incidents rather than individuals’ dirtiness.

“It is a story that tries to look into society in the context of relations. It is the dirtiness of society and social dynamics: This has been a situation that has been dictated to us,” he said.

Voice against the censor

The exhibition also presented some works that have a unique structure in their expression. Ağaoğlu, who brought an eccentric and unusual sound to her poetry, took visitors on a journey through the universe of a poem in her expressive work against the “censor.” She said that she has especially focused on the issue of the censor in her two works that are on display at the exhibition.

Ağaoğlu believes that she has not seen a drastic change in the freedom of opinion when she looks at both contemporary Turkey and its past. “I do not believe the artists today are freer than they were in the past,” stated Agaoglu, who is a member of International PEN, the worldwide association of writers.

Ağaoğlu is known for her creative performances that combine poetry and the plastic arts into a different style she calls “poem installation.”

Copies of her surrealist poem, “The Other Lead Soldiers,” were printed on yellow draft papers and left crumpled on the ground for visitors to pick up. Another work of Ağaoğlu referred to poets who were forced to remain silent by the post-coup administration.

“The Poets Remained Silent,” is a white-and-black photo depicting five poets and philosophers with covered mouths. She attached a banner containing an acid remark by Kenan Evren, the military general who led the military coup in 1980, that said he would stage a coup again if there was a need to do so.

The exhibition also attracted foreigners with content that delved deep into Islamic culture. Among the visitors was a couple from the German city of Hamburg.

Speaking of Morova’s works, Laura Baldwin, a Web designer, expressed her deep admiration of “Tarih-i Kadim.” “I see both sides of life in this work. I see life and death. I see life and shadow. I see beauty and ugliness,” she said. “I did not get any message out of it because it gave me more than a message,” she added.

Her husband, Niklas Baldwin, a photographer, disagreed with his wife, saying he did not believe artwork aims to present a social message to society.

“If an artwork releases a message to society, it would be a cultural reflex rather than an artwork. However, it is an artwork which is reborn from the ashes of Islamic culture as it goes back to its origin,” he said.

The exhibition provided a unique opportunity to students who study art at university. A group of students from Mimar Sinan University joined other visitors at the exhibition.

Sevil Akçınar, one of the students who attended the event, said that she was pleased to see such meaningful and expressive performances rather than the meaningless and absurd works that one frequently sees in contemporary art.

Updated with French translation of this article in 12-5-2010: